The Problem with Ethanol and Small Power Equipment

Over the past decade, ethanol usage has increased to E-10 (10% ethanol) now throughout the United States and continues today with E-15 blends on the horizon. The following demonstrates the negative side effects of ethanol-blended fuels. This is especially true for older power equipment and engines not designed to tolerate ethanol-blended fuels.

Ethanol Harms Rubber and Plastic. Did you know that ethanol can have devastating effects on power equipment? Ethanol blended gasoline can damage plastic and rubber fuel system components, particularly in older power equipment not designed to tolerate ethanol. In the example to the right, the bowl gasket became brittle and non pliable. The 2-cycle carburetor diaphragms on the far right are stiff causing starting and running problems. The primer line and return lines are brittle causing fuel to leak.

Ethanol Corrodes Engines. Ethanol is corrosive by nature and hygroscopic (attracts water), particularly when higher amounts of water are present. This type of damage to a carburetor is typical when phase separation occurs and the highly corrosive ethanol / water mixture corrodes fuel system components.

Ethanol Causes Fuel Decay. High amounts of oxygen in ethanol blended fuels cause gasoline to decay faster, and if left standing for long periods of time, the decaying fuel leaves varnish and sludge deposits as depicted in these carburetor images.Gasoline and milk are both organic -- they decompose the same way. A foul, sour smell indicates BAD GAS! Power equipment not treated with an ethanol fuel stabilizer will become hard to start within 30 days. Gasoline will decay in as little as 60 days!

2 Cycle Phase Separation: The engine to the right has been destroyed from phase separated fuel. Ethanol is hygroscopic (absorbs water), the vial to the right is from the fuel tank of this engine. The fuel on top is gold in color because 2 cycle oil will only bond with the gasoline. The octane is also lower because the ethanol has separated from it and bonded with the water below. Approximately ¾ of the clear fluid in the bottom of the vial is ethanol. The ethanol water mix settles in the bottom of the fuel tank and is picked up by the fuel system, then delivered to the carburetor. The engine ran on this ethanol mixture, causing it to run extremely hot with no lubrication. This damage occurs in only a few minutes of operation. The engine also ran out of control, which poses serious safety concerns for the equipment operator.

Engine Failure from Varnished Fuel: This piston and crankshaft assembly came from a 2-cycle engine that ran on stale fuel. The engine was hard to start and had low power. It ran long enough to gum all of the internal components, including sticking the rings.

Why bad gas occurs: The problem with gasoline containing ethanol (E-10) is when it is left standing in a fuel system for long periods of time with fluctuations in temperature & humidity -- the fuel will start to decay in as little as 60 days. What would happen if you left milk in the back of the refrigerator for 60 days? E-10 gasoline decomposes the same way, just not as visual -- a foul, sour smell is prevalent when E-10 is decaying. 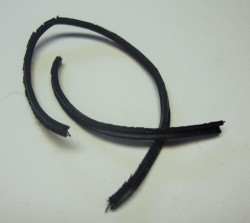 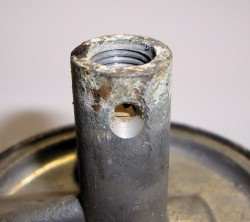 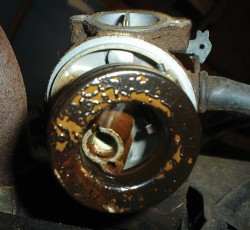 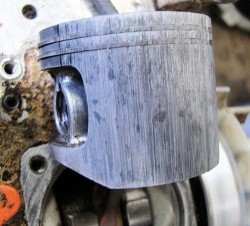 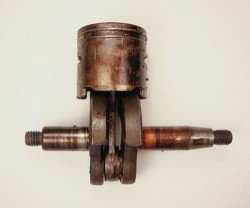