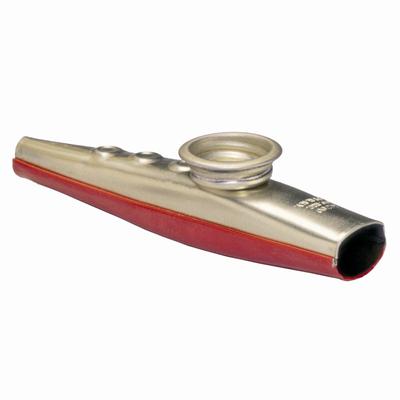 * Estimated stock levels as of Sat, Jan 25, 2020. All items subject to prior sale. Prices may vary between stores and online. Please call ahead to confirm availablity of items marked as Limited Stock.

Anyone can be musical with a kazoo, and this one looks as great as it sounds!

The kazoo as we know it today was invented in the 1840 ft s by two men in Macon, Georgia named Alabama Vest and Thaddeus Von Clegg. A small factory in western New York began mass producing the instrument in 1912, and the kazoo began to enjoy widespread popularity, especially with coutry string bands and early jazz ensembles.

This classic all-metal kazoo is made in the same Western New York factory that originally developed the instrument in 1916.

The kazoos are made the same way today as they were almost 100 years ago. Today, as in the past, over 20 die press machines are run with one motor connected with overhead jack shafts and leather belts. After the numerous metal parts are formed on these antique machines, the individual kazoos are assembled by hand.
The Woodstock Kazoo truly is the original all American metal kazoo.