The health and well-being of our valued customers, associates and communities are always a top priority at Sutherlands. As we navigate the coronavirus (COVID-19) developments, we wanted to send a personal note to let you know how we are responding.

We appreciate your continued support of our family business during these challenging times. 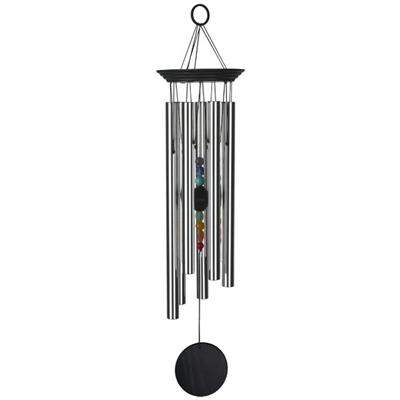 * Estimated stock levels as of Thu, Apr 9, 2020. All items subject to prior sale. Prices may vary between stores and online. Please call ahead to confirm availablity of items marked as Limited Stock.

Tuned to the chakra frequencies, this windchime features 7 chakra stones.

The 7 stones of this wind chime's clapper are aligned in an ascending column, just as the seven chakras are aligned along the spine in the human body.

Woodstock Chakra Chimes combine color and sound to underscore the ancient meaning of the major energy centers of the human body. Eastern Philosophy can be difficult for the Western scientific mind to assimilate and yet, many of the eastern claims are being proven scientifically as the time-honored truths that they are. According to the traditions, there are 7 basic chakras, which correlate to the seven main nerve ganglia emanating from the spinal column, as revealed through modern studies of physiology. Each Chakra location has a unique meaning, orientation and healing potential. Woodstock Chakra Chimes are intended to remind us of the strength of mind over matter and, through sound, give us a small window into the balance of the physical and metaphysical.